A Taste of the Green Egg Omlette: A Review 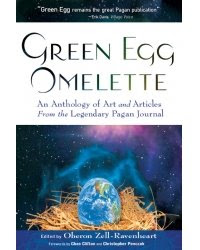 Once upon a time, you could tell what "generation" a Pagan was by their first encounter with the Pagan magazine Green Egg. (I'm from the early Darling years, myself, though my teachers shared with me stacks of their original, mimeographed and hand-stapled Zell years, along with stories of legendary feuds in the Forum--the letter column of the zine--and of rivalries lost and found between one tradition and another.)

Green Egg held an importance to the forming Pagan community that nothing in recent years, with the possible exception of The Witches' Voice website, could hope to rival. We found ourselves and came to understand ourselves through the community we found in those pages.

Oh, there were exceptions. Some of us encountered Circle Network News first, or The Crone Papers, or Harvest. But, before the tidal wave that is the Internet swept most of them away, the first contact most Pagans had with the wider Pagan world was with zines, like Green Egg (often in the form of tattered stacks stored under their HP/s' bed). And if this is news to you, well, then, you must be a member of one of the new and rootless post-Web Pagan generation.

But even if there are no dog-ears or coffee spills to mark the pages, the new Green Egg Omelette anthology should help close the communication gap between generations.

Though it would be untrue to say that it's all here--the sometimes combative forum letters are not represented, for instance, which is perhaps just as well--there is a wide selection of articles that show how American Paganism came to define itself over the four decades of the Green Egg's publication. Some of the ideas in these essays became so important in themselves, like Tony Kelly's "Pagan Musings" or Morning Glory Zell's "A Bouquet of Lovers," that it is almost startling to find them here, in their original forms.

Other articles reflect a zeitgeist that peaked and ebbed over the years. It gave me a nostalgic thrill to find "witchcraft" [sic] referred to as "low-magic" by Brother Khedmel in a 1972 article on ceremonial magick; the rivalry and one-upmanship between "high" and "low" magick seems to me (mercifully) to be mainly a thing of the past at this point. So, too, I found myself chuckling at satires of the Robert Bly men's spirituality movement, and at half-forgotten icons like Pagan Cowboy Joe.

Christopher Penczak and Chas Clifton have contributed a forward and an introduction, and Clifton's chapter introductions provide some structure to what could easily have seemed like a jumble of articles.His chapter headers do a great job summarizing the main trends in areas such as Ecospirituality, Worship, Pagan Culture, and Gender and Sexuality--exactly as you would expect from the author of Her Hidden Children (the definitive history of the evolution of modern Paganism in the United States). Oberon Zell and the other primary editors also contributed to an introductory section which traced the evolution of the magazine over forty years of Pagan history, in terms that will probably be of interest to those who remember the different stages in Green Egg's development.

Overall, the book has a particularly professional layout, reflecting the original magazine while smoothly integrating old and new material in a way that is clearly not simply a cut and paste of old files. Lots of old illustrations and photographs are included, and they are generally of a high quality.

Unfortunately, there are some glitches, too. As is not unusual from small press publications, there are more typographic errors than there should be, and some of the biographies seem curiously out of date. (Chas Clifton's, for instance, seems to date to the time before the publication of his 1994 volume on Witchcraft and shamanism from his series Witchcraft Today. This oversight is especially odd given the important role Clifton played in helping to weave together the chapters of this anthology.) And, most seriously, an index would have been a wonderful addition to the book.

These are minor concerns, of course. Truth to tell, I enjoyed my tour of the Green Egg Omelette, and I enjoyed sharing it with my friends over the holiday. I urge everyone with a streak of either nostalgia or curiosity about the past four decades of the modern Pagan movement to order a copy. I suspect you will enjoy it--maybe even as much as we used to enjoy those tattered old copies from under the bed.

TPW said…
I find that a book with typographical errors in it is tough to read - part of my mind is keeping a count of how many there are while another part wonders how I can get the job of proofreading the next edition!

If a copy of this one falls into my hands, though, I will gird myself against that because I really am interested in learning about those things that my first teacher had hidden under her bed!
11:50 PM

Morgan said…
Wow... this makes me feel a little old!

Hystery said…
"But, before the tidal wave that is the Internet swept most of them away, the first contact most Pagans had with the wider Pagan world was with zines, like Green Egg (often in the form of tattered stacks stored under their HP/s' bed). And if this is news to you, well, then, you must be a member of one of the new and rootless post-Web Pagan generation."

Anonymous said…
Neo-Paganism in American used to be a very small thing indeed. My guess is that most readers of the old Green Egg knew one another--or close to it!

So here we are with a retrospective anthology of the "early years." That probably makes some of us practitioners/partisans of "dinosaur Craft!" So I'm breaking out some golden oldie spells...so mote it maybe...
3:19 PM

Anonymous said…
Thanks for your kind words, Cat.
11:43 PM

Anonymous said…
I had heard of the Green Egg a while back, but I've never even read it! Sounds like this book would be a great way to catch up.
12:06 PM

Hystery said…
We could be catching up with our readings regarding the roots of the Neo-Pagan movement well into the 19th century- and earlier. People like the suffragist and feminist theorist M.J.Gage who wrote extensively and positively about witchcraft and described what came to be known as the "Burning Times" back in 1893 remain largely ignored. Perhaps Neo-Pagan influence on the experiential or the popular mythos of the Old Religion distances us from an exploration of the development of Paganism within the context of an evolving western intellectual tradition.
11:51 PM

TPW said…
I've never been sure how to fit the "Burning Times" into my religious views. The actual number of victims has been proven inaccurate, the songs about it are far more angry that I want my religion to be, and the persecuted were most likely not Pagans of any sort. On the other hand, those sorts of brutal acts are shameful regardless of the number and identity of victims. Certainly such tragedies must be remembered to reduce the chance of some psycho committing such acts again, but think that the so-called "Burning Times" have more to do with Christian history than Pagan.
8:02 AM

Hystery said…
Terence, I share your caution for the historical accuracy and even the label "Burning Times" which is why I tend to always put it in quotation marks. As a post-modern people, I think it is natural for us to be wary of all attempts at mythologizing history. A good deal of Neo-Pagan history is very recently constructed (and we could easily slip into a lengthy conversation regarding archaeological debates, post-modernism, and historical accuracy here! lol) But what I most wanted to communicate was that it might not hurt us to spend a bit more time exploring the evolutionary path(s) of Neo-Paganism within the philosophical and religious context of the 19th and 20th centuries. Christian history, for better or worse, is tied up with our own. Paganism shaped the genesis of Christianity. Christianity shaped the genesis of Neo-Paganism. Our head-centered conversations, questions, battles, and love affairs within the interfaith community inform this embodied spirituality. Any construction of Neo-Pagan history that either portrays it as a reemergence of long-buried ancient faith or as a manifestation of the Zeitgeist of the last century ignores the sometimes plodding, complex history of the Transcendentalists, Spiritualists, Universalists, Romanticists, Theosophists, and proto-Neo-Pagans of the generations before.
11:55 AM

Broomstick Chronicles said…
Thanks for this review, Cat. I'm pleased to say they chose the only article I ever wrote for GE, at the request of then-editor Sun. I'm eager to get my contributor's copy at the launch at PantheaCon next month.

You might also like to know that all the old Reclaiming Newsletters are being reissued on DVD. The project is in process.
5:34 PM