By Peter Bishop June 26, 2011
The Spiritual Journey so far:
Prologue I: Peter In Kenya
Prologue II: A Liberal Christian With Balls
Part I: A Refugee Looks Back
Part II: Leaving Home
Part III: Who Am I?
Part IV: Learning About Race and Gender
Part V: Watching My Students Drown
Part VI: Animal Bones 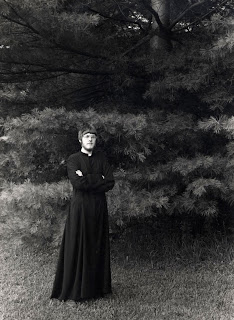 As a child, my mother and grandmother took me along with them to St. Andrew’s Methodist Church. The people there were all very nice, very sincere Christians, but it was a little bland. I think back on it and my most vivid memories are of the annual church picnic which was always in my grandmother’s back yard, overlooking Long Island Sound.

The closest thing to religious fervor in our household was my father’s agnosticism. You hear the word agnosticism and you probably think of something wishy-washy, a sort of intellectual shrugging of the shoulders. But that was not my father. He was finishing his doctoral dissertation in astrophysics and beginning a career as an academic, and he had a fierce integrity around intellectual honesty, including honesty with oneself. He was adamant in his assertion that we DO NOT KNOW if there’s a God. He didn’t strongly object to the practice of religion, though. I remember him once saying to my mother that he didn’t mind her going to church any more than he minded her eating yogurt, as long as she didn’t ask him to. He also didn’t object to her bringing me with her. The one thing he felt strongly about regarding my religious upbringing was that I not be baptized until I was old enough to make that decision myself.

I liked Christianity when I was growing up. I think what I liked most was that it brought people together to help them live good lives. But it lacked…something. I couldn’t put my finger on what, but it was a bit like a steady diet of oatmeal. You could eat until you were bursting at the seams and still be unsatisfied.

When I went away to Yale University, I began to explore. I took courses in world religions. I learned about Hinduism and Buddhism and I read the Tao Te Ching. I also dropped in on all the campus ministries—the Lutherans and the Baptists and even the Quakers (where I found I could not sit still through an hour of silent worship without literally twitching by the end of it). I spent most of my freshman year worshiping with the Congregationalists. They had a Wednesday night communion service and discussion group that I found nourishing, but at times I got kind of frustrated with them. It seemed like whenever things started to get really interesting or spiritually deep, they’d shy away.

I remember one night, one of the regulars told how his professor had said Hinduism and Christianity were really very similar in many ways. He was baffled by this, because Hinduism is so baroque, with all those gods and yogic practices. The Chaplain explained to him that it made sense because the professor was Catholic. “Protestant spirituality is very dry, by comparison,” she said. It was around that time that I came to wonder if there were mother loads within Christianity that I had not yet tapped.

The Catholics were the one campus ministry I’d steered clear of. The whole papal infallibility thing made it a non-starter for me. Plus, both my parents were astronomers; I’d grown up hearing about the Church's treatment of Galileo and their violent opposition to the heliocentric model of the solar system.

But it turns out there is a place outside the Roman Catholic Church where you can still find that juicy, baroque spirituality that Protestantism so lacked. Towards the end of my sophomore year, I signed up for a weekend retreat at an Episcopalian Benedictine monastery in Cambridge, Massachusetts.

It was like a child’s first taste of ice cream.

This wasn’t any Protestant oatmeal. Here, they had frankincense. They had Gregorian chant instead of those stolid Wesleyan hymns. And this wasn’t a little commemorative bread and wine; this was a freakin’ Eucharist!

Ice cream? No, it was more like some vital nutrient that my body had always lacked, and suddenly I’d found a food that gave me a rich source of it. That Easter I was baptized into the Episcopal Church at Yale, and I spent the following summer at another Anglican monastery, St. Gregory’s Abbey, wearing a cassock and testing my vocation to be a Benedictine monk.

For six weeks, I woke each morning for Matins at 4:00. Often I’d catch another hour’s sleep afterwards, but some mornings I’d walk the grounds with a wool blanket safety-pinned over my cassock like a cloak, and watch as the black night sky turned grey and then pale blue, before heading back indoors for Lauds at 6:00. Every day had a rhythm of prayer and meals, of work and rest. I learned how to use a pitchfork, how to weed a flowerbed, how to feed pigs, and even how young bulls were castrated. In the afternoons, we paddled out to the raft in the middle of the pond and skinny dipped—a terrifying experience, at first, to a young man prone to spontaneous erections, but after a couple of days I found I could relax and trust my body—at least that much. I swept and vacuumed, washed vegetables and dishes, and in its own way, everything I did there was deeply sensual. The Ordo slowed our lives to a pace that allowed us be fully attentive in each moment.

The monastic schedule looks rigid on paper, but I found it liberating. It freed me from distractions and offered me—offered everyone there—the freedom to go deep. Deep into prayer and thought, deep into reading and writing, and deep into the physical pleasure from ordinary things like strawberry jam on homemade bread or the smell of books in the library. I felt like a kid in a candy shop in that library. I’d brought a dozen or so books of my own to read, but left them aside when I discovered on their shelves writers like Carlo Carretto and Thomas Merton, and also Martin Buber and Franz Rosenzweig. (A little odd, perhaps, that I spent so much of my time among Benedictines reading about Judaism.)

St. Gregory’s fed a deep hunger that I felt for a life that was orderly, focused, and centered, but more than that, the monastery fed my hunger for meaning. Life made sense at St. Gregory’s. It’s where I learned that there were such a things as spiritual communities, and people who lived their whole lives centered on the deepest levels of meaning. It was another of those major turning points in my life, and I think I might have signed up for the novitiate on the spot if it weren’t for one or two little things. I should finish my college education first, of course. And there was also the small matter of…

At age 20, the thought of taking a vow of celibacy would have been about as easy as… I don’t know… scaling a 50-foot wall with my bare hands. I mean, people have done it. But standing at the foot of that wall, I couldn’t really see how.

So I didn’t stay. But I left feeling nourished and awakened in a way I’d never been before. I held onto the idea of maybe coming back when I was older, when I’d experienced more of the world, maybe slaked a few of my appetites and allowed the hormones of adolescence to subside a little. It wasn’t a definite plan, just a back-burner idea, but one that I kept gently simmering for quite some time. Decades later, no longer Christian, I still feel a connection there—enough to correspond occasionally with the guestmaster (now the abbot) and to read the Abbey Letter cover to cover.

But the inability to commit to a life of celibacy really bugged me at the time. It’s not that the choice was wrong; it’s that I didn’t really feel it was a choice. I felt I was simply too weak, that it had been a failure of courage, a lack of integrity.

Fear—facing it, owning it, and beating it—turned out to be a major theme of my spiritual journey.

Hystery said…
Peter, this speaks to a part of me that needed attention. Thank you. I've been trying to feed my monastic tendencies for my entire life. It is one of the reasons I decided to worship with Friends and one of the reasons I continue to be frustrated with some of my experiences among them.
6:50 PM

Peggy Senger Morrison said…
Sr Antoinette Traeger, OSB age 80 to me: Honey, if you don't have sex with any of them you can love a lot more of them!
11:54 PM

David Salisbury said…
This is so interesting- thanks for this!
3:39 PM

Anonymous said…
Where is part three? :)