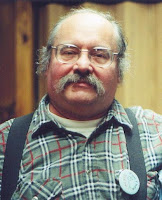 A good and modest man is dead, and I am sad. Last night, my friend Alexei Kondratiev died. He was only sixty-one.

I found out online, at The Wild Hunt, the Pagan news blog, and my mind has been throwing these momentary blanks in the hours since I read the news; I'll be puttering along, minding my business, when I'll find myself wondering, Why do I feel so heavy, so sad? And then I remember: Alexei died last night.

We weren't particularly close. I honestly do not remember the last time I saw him. But he was one of a circle of men and women I call my friend, and my sense of him is not abstract, but is mixed together with memories of a Beltane when it was too humid and too rainy outside to want to picnic, or of another, later day in May when the sun beat down like swords on bucklers, and I crouched beneath a tarp, listening to him tell us stories.

I remember Alexei over breakfasts and late night snacks, I remember Alexei and Len sitting at the next table over from me at Pagan gatherings, or standing patiently across a circle from me, waiting for a ritual to start. I remember the lilt of his voice, and how excited he could be when someone caught up and understood a new idea he had, and how sad, and stiff and inward he could become if he was scolded, or thought he had done wrong. And I remember the warmth in his eyes, when he would laugh among old friends.

How many languages did he speak? It was hard to get an exact count. He insisted that various of the Celtic languages did not count as separate, because they were too much alike--or he'd say he didn't really "speak" them, if he considered himself less than fully fluent.

I've heard his mind wander across a dozen countries' folklore, gently and almost lovingly pointing out patterns and histories that braided and unbraided themselves across Pagan Europe. On rare occasions, I heard him talk of his own childhood, and how he began breathing in the Celtic mythologies that were his passion.

He was brilliant. And softspoken. And genuinely modest. Was he pedantic? Perhaps he seemed so to those who knew him best, but I did not soon tire of listening to him talk. He loved the Old Gods, and he loved the old stories, and he loved to tell anyone who was interested what he knew of both.

I took his talk for granted, a fixture of my world.

As I say, I couldn't claim to know him well. But he was tribe to me, extended family; part of a Pagan Brigadoon that has met together year upon year upon year. I couldn't be there every year, but when I was, he was almost always there as well. Just... there. Ubiquitous. And now I will never see him again.

My mind shies from thinking what this means for his partner, Len. Just freezes, stops, and will not consider yet.

Here is what I do know: For twenty-five years, I have been a Pagan, and for all of those years, I have felt that I am weaving something, a kind of cloth or tapestry, together with my friends. Paganism is so new, and, when it is working well, so warming and so full of hospitality, that for me at least, the heart of my experience as a Pagan has been the weaving together all of our separate lives to form one fabric, one community honoring the earth and the old gods. I've never cared particularly who called himself a shaman, who a Witch or a Hellene or a Druid, because I have felt it in my bones how much we are woven together as kin.

Believe it or not, today is the first day I have properly understood: the whole time I have been weaving, weaving my life and the lives of those I love into this fabric, time has been unweaving it again at the other end.

Alexei has died. And part of the world is gone.

I will miss Alexei--but it is for myself that I cry.

Helen/Hawk said…
What is remembered, lives.

that Weaving of which you speak....lives on. Truely.

Un-woven for the individual: of course.

But for the rest of us...they live on. In our hearts, our memories.

And for some, there is their writings where others can meet them even past their passings.

Kathleen said…
Thank you for sharing that kind reflection of your friend. I am sorry for your loss, but it sounds like he will live on in the hearts of many.
10:38 PM

Anonymous said…
Both you and Galina Krasskova have indicated what a good man he was in this life.

I'm certain he will be very missed.

But Hawk put it well: what is remembered, lives.

JJ said…
Alexei was a brilliant man who helped out whenever he could on even the most nit-pickiest of Gaelic questions. My breath caught in my throat as I read your words. The world loses another bright light and the Summerlands gains another.
3:18 PM

Morgan said…
I am so sorry for your loss. Who is remembered, lives. Blessed be.
5:56 PM