By Cat C-B (and/or Peter B) January 09, 2018
Pagans often argue about how to define who we are.  What are the boundaries--between Wicca and Witchcraft, between Heathens and Pagans, between polytheists, pantheists, and non-theists...  While I could do without the acrimony, we're a new as well as an old religious movement, so it makes sense that like any adolescent, we are fascinated by questions of identity.

I will admit to preferring the Quaker approach to identity, though: rather than trying to create the definitive checklist of belief that make someone a "real Quaker," Friends typically share a body of testimonies and questions for reflection with those who are drawn to the Religious Society of Friends. "Do you feel this same sort of spiritual leading?" Friends ask one another.  "Does this speak to the condition of your soul, as it does to ours?"

Queries, not checklists of doctrine, hold the ways Quakers approach discernment, including around membership.  And though no individual can declare themselves a Quaker without engaging in the communal discernment process around membership, the focus on Quaker queries is not so much a matter of asking "Who is, and who is not a Quaker?" Instead, we reflect together on the testimonies that have come down to us in order to learn more deeply how to live into spiritual community together.

Quakers have a long history of upholding certain principles, not so much as a creed or a list of commandments, as of inward guides for self-reflection.  We ask ourselves, "If it is true that I believe Spirit is speaking to me as it has been speaking to others, what that others have said do I hear echoed in my own heart?  And is the life that I am living consistent with those echoes?"

Testimonies, then, are not mainly a matter of qualification to join a Quaker club.  They are a tool for inward listening for the stirrings of Spirit... which means that, in some ways, they are most properly approached as questions, and not the yes/no type. 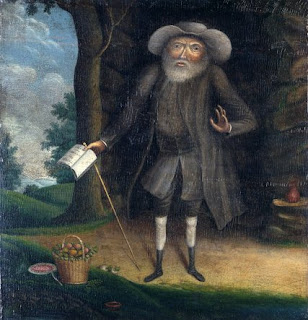 I have always been fascinated by daily reflection books.  You know the type: there's a quote or a spiritually uplifting idea on each page, and you're supposed to read and reflect on one every day of the year.  Christians, of course, like to have them be scripture quotes, but I've seen feminist day books, New Age day books, even Quaker day books.

They rarely work for me, though I collect them.  To begin with, I'm lousy at maintaining the kind of regularity that would allow me to truly work through a page a day in anything.  But also, most of the books I've seen have been... forced.  A little too much straining to sound wise, and a little too out-of-step with what I need, I suppose.  Perhaps it is simply that there's no substitute for seeking out your own daily reflections.

Without any promise to be wise, without any promise to write daily, I propose to begin a new series here, starting today: I intend to write my own set of reflections and queries, focused on some of the traditional Quaker testimonies and queries, some of what I see as similar Pagan understandings, and maybe a few places where I see one group of religious teachings coming out a little ahead of the other.

At the moment, my thought is to begin with a focus on the relatively new Quaker acronym, SPICES, for Simplicity, Peace, Integrity, Community, Equality, and Stewardship.  Of course, my mind immediately goes to the Four Elements of Wicca and Druidry as a possible set of understandings to explore: Earth, Air, Fire, and Water.  But other possibilities exist: comparing how Quakers and how Pagans approach sexuality, for instance,  or our similarities and differences in how we order worship, recognize gifts, or test the wisdom of individuals and communities.

I'm still working out the details.  But I do know that there's something about wedding the wheel of the year with the idea of reflecting on testimonies and queries that appeals to me a good deal.  And I know my jumping-off place: January.

January is for Simplicity.

Hystery said…
To better understand your perspective, I am seeking more clarification on this part of your post:

"And though no individual can declare themselves a Quaker without engaging in the communal discernment process around membership,"
9:38 AM

Cat C-B (and/or Peter B) said…
You have caught me in a generalization.

Of course, like everything else in the Quaker world, it's really more complicated than that. Many meetings are like my own, Mt. Toby, and make no distinctions between members and non-members. And so it's not exactly accurate to equate being a member with being a Quaker! However, it's absolutely true that "corporate" (ie, communal) discernment processes, not just around membership, but around leadings, clearness generally, and the business of community, are vital to what Quakers are up to. So "solitary Quaker" is something of an oxymoron... As they say, Quakerism is "caught, not taught," and it's hard to do that without engaging with community at some point in the process.

That's not to say that Quakers who are cut off from one another are no longer Quaker, or that membership in a Quaker body is all there is to it--or is even necessary. There were no membership processes for that first generation of Friends, after all--though they did come to rely on one another and on group discernment in general pretty quickly.

Not to mention that, as a non-creedal religion, there's no way to make a fully accurate generalization on such a topic. That there's more to it than saying, "I am a Quaker" three times is perhaps all that I can say for sure... beyond the fact that, in the end, Quaking is more important than being a Quaker.
10:52 AM