By Peter Bishop May 05, 2007
Today I marched with the Mt. Toby Friends contingent in the Northampton Pride March, and it was a blast! I've been part of the GLBT concerns committee at Mt. Toby since last fall, and the Pride March is always that committee's big event of the year. There were about half a dozen of us marching. D--, a fellow committee member, has been doing the marches off and on since their inception a quarter of a century ago, and was full of lots of stories about how much it has changed. The atmosphere today was like a carnival: balloons and music and children and dogs and fried dough... Back in '85, the feeling was much more embattled. That year, I'm told, there were gang rapes happening in the area and firebomb threats against the local wimmin's bookstore and lesbian archives, and the Pride March was an act of courageous defiance. It's really heartening to see how celebratory it's become. Not that there aren't still ongoing struggles for justice, but we've come an amazingly looooooooong way.
I took a few photos, and occasionally handed my camera off to bystanders so I could get pictures of myself. You can get to the whole gallery of full-sized images here.
That's me in the flourescent green tee shirt. 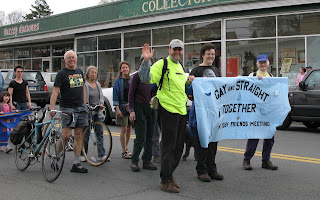 Here are a couple of overviews of the crowd on Main Street. 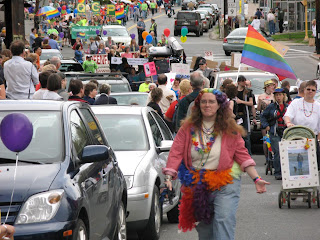 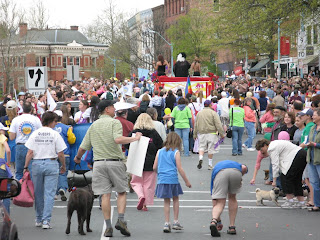 I got this panorama by stitching together half a dozen individual shots taken from the top of the courthouse steps.

And me again. (I'm such a Narcissist.) 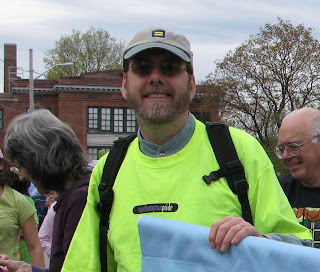