I was rushing along through cleared fields and woods roads, up and down hills like the ones I remember from the town where I grew up. Though it looked nothing like the specific landscape behind the house that Peter and I are moving to this month, in the dream it was part of that landscape.

I was in a hurry because it was almost dark. There was a sense of urgency, but no panic--just a need to cover a lot of ground efficiently. 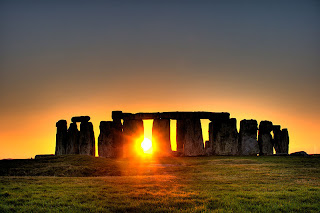 As I came up over a rise, along a power line I was following, I saw silhouetted against the brow of the hill a remarkable sight: a circle of standing stones, very stereotypically Stonehenge-ish, tucked under the wing of the soaring high-tension power lines. The sunset flared out behind the pairing in a breathtaking way, and I mourned that I did not have a camera with me.

I resolved to return with one for another sunset, yet wondered if it would ever be possible to capture the image again in quite the same way. I paused for a moment, drinking in the sight, and then rushed onward, into the darkening woods.

* * *
For whatever reason, I take change hard. And the older I get, the tougher it seems to be for me to commit to change anything. The main reason I don't dye my hair has nothing to do with Quaker simplicity, and everything to do with my fears of buyer's (dyer's?) remorse. What if I don't like it when I'm done?

I'm not old. But I'm old enough to think twice, three times, maybe thirty times, on even the smallest changes. My reaction time is already slowing, and not just when I drive my car.

The sunset is on the horizon. I am in a hurry. If I had not committed to making this move now, would I ever have had the courage to make it at all? 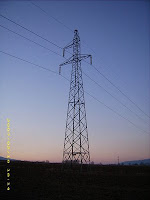 And what do I get for my move? High tension. Energy. High voltage energy, yet, crackling overhead, and a clear path to follow, at least for a while.

And what is under the wings of this change? What is it my sunset illumines for me?

Well, Stonehenge only has no connection to druids in a factual sense. I don't think it's especially hard to read, in the language of dreams. I might as well admit it to myself: my desire to live in sacred relationship to a forest is real, and powerful. I might as well pause, and take in just how important it is to me, in all the ways that matter. I might as well enjoy the view.

Even if I can never recapture it, I know what I am feeling about this vision, this moment.

* * *
And as for the fact that there are no such standing stones anywhere near the ordinary New England woods behind my home? Well, that's so much foolishness. Every plot of land is sacred land. Every stone was raised at Stonehenge. And every mountain is the sacred mountain.

Take off your shoes, Cat. You are standing on holy ground.

Maybe it is because I grew up on one of the eroded mountain stubs that is the distant sister to the mountains of Tennessee. Or maybe it is because the woods I am falling in love with and hope to stand steward to are so similar to the woods of Eagan. But this video breaks my heart.


Every mountain is a holy mountain. Every forest is a holy forest. If you feel the way I feel, speak out against the mountaintop removal mining that is destroying the mountains, the forests, the headwaters and ecology and community life of Eagan and hundreds of places like it.

Roughly one-third of mountaintop removal coal mining projects are permitted under nationwide permits, which means that eliminating the streamlined rule will help slow the pace of destruction in Appalachia.

The Army Corps of Engineers is accepting public comments for the next 30 days on its proposal, and they need to hear from you.

Please take a moment to tell the Corps that you support ending the streamlined permitting process for mountaintop removal coal projects.

Mercury Redbone said…
Thanks for writing this, and for highlighting the universal interconnection. As a Pagan/Animist from southern WV, the issues are for me both intensely personal and broadly emblematic of the state of world.
4:26 PM

Aquila ka Hecate said…
Yes indeed - it's all holy.
And there are humans among us who don't aknowledge that sacredness at all - who would plunder each holy stone for the ephemeral wealth it provides them.
And then there's us - we must place ourselves between the sacred and the profaners.
Love,
Terri in Joburg
11:49 PM

Pitch313 said…
I was, much as I think lots of us were, a Land-Hearted Neo-Pagan way before I discovered any formal resources of other folks. That is the wellsprings of all my practice--The Land that I grew up within.

But either the Whole Earth is holy, or none of where we all of us exist is. There's no holy here but not there stuff as far as I can tell.

A for stones, there's this maybe stone structure up Massachusetts way:

Anne Hill said…
Beautiful dream image, Cat. Thanks for sharing it, and your musings on it.
10:12 PM

Magaly Guerrero said…
I feel sick every time I see how we, as race, lose contact with Nature and take it for granted. Thanks for this post, I'm going to take a look.
2:46 PM