The Great Outbreath of Summer

By Cat C-B (and/or Peter B) August 03, 2011
This past weekend, sitting out on my porch in the long twilight of a summer's night, I noticed how, where a few weeks past, our lawn was spangled with fireflies, their lights have almost all gone dark.  I noticed, too, all around me in the night were the songs of crickets.  It was not so many weeks ago that there were no crickets to be heard, and now their songs of love and death fill the days and evenings both.

The long, slow gathered breath of of summer's beginning is over; the wave crests, and the outbreath is beginning. 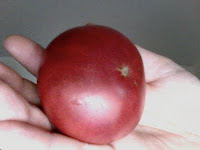 Tomatoes are ripening in the garden we scurried to plant at the end of May.  Zucchinis mature in such numbers and size that I am challenged to put them all to use; the early lettuce has bolted in the heat, the raspberries are done, and the blueberries are blushing at the end of the garden.  Summer's end is coming, and anything that can bear fruit or give birth is hurrying to do so while it lasts.

This is not the summer I thought I would be having.

I had thought that this summer would be a lot like last summer: lots of writing, lots of hiking, lots of "quality Quaker time."

Instead, it's been lots of gardening, lots of canning and preserving food, and unexpected Pagan time: Peter and I were lucky enough to have surprise guests this past weekend, so we celebrated a pick-up Lammas out by our raised bed gardens.

We did a symbolic sacrifice and corn "harvest" (with farm-stand corn, as that is not one of the crops we grow) and roasted it on the grill, did a quick "wine" blessing with the homebrew, and feasted on an almost entirely locally-grown meal.  (The flour and barley for the bread and beer were not local.  But since I made them both in my own kitchen, they felt appropriately tied to the local land.)

We brought a share of the bounty out to the woods for the land spirits to share. The next day, everything but a few cherry tomatoes had disappeared.  (A good omen, surely.)

So it has been a satisfying summer.  And--despite the disappointing berry crop this year--a fruitful one.

But I'm not living much in my words.  I'm not writing very much.  I'm making pickles, getting dirt between my toes, or reclining in the shade of a favorite tree, its leaves rustling in the great outbreath of summer.

Ali said…
It was lovely seeing you and Peter, and thank you so much for celebrating Lammas with us despite us being woefully non-Wiccan Druids! ;) I can't tell you how much our short visit was a respite from busyness and stress!

Also, hope at least some of the pictures I took came out alright, and don't forget to send at least a few of them our way so I can scrapbook them. :D
3:13 PM

kevin roberts said…
sometimes it's more important to just live the days and let them go at evening, rather than to try to catch them and hold them tightly to you forever.

i've been living, and not writing hardly at all, ever since the snow began to melt. for me though, the time has been one of a lot of reflections, and i'm not now who i was then.