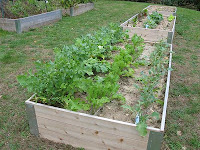 I have come to think of the work that I do on Saturdays as "farming."  Now, I know it isn't farming--not really.  We have a medium-sized vegetable garden and two dogs, and that's not a farm, by any stretch of the imagination.

But I keep thinking of a comment Joel Salatin made in Yes Magazine once, about how Americans have become used to thinking of our homes as centers of consumption, but how once, thinking of your home as a center of production (typically, a farm, for most of us for most of our history) was the norm.

And between trying to live with less plastic junk and trying to eat more sustainably and locally, Saturdays at home have become very productive days.  And that productivity--the willingness to substitute patience, skill, and thrift for consumption--I've come to think of as a species of farming.  (My apologies to actual farmers, whose work I increasingly appreciate.  But thinking in this way works for me, somehow.)

First thing this morning, after sorting the laundry and putting a load in to wash, I took a half gallon of local milk and put it into a crock to warm up to 86 degrees F.  While that was going on, I rinsed and repackaged the alfalfa sprouts I started on the window sills this week, and then I pitched the culture and rennet into the milk and set it aside to do its thing till tomorrow morning, when I'll put it into cheesecloth to drain and become next week's Neufchatel cheese for our bagels.

Then I took out the three bags of CSA veggies for the week, washed them and processed them, and set aside the share for our neighbor Janet.  By then, the first load of laundry was ready to take out and hang on the clothesline, giving me a chance to notice what an extraordinarily beautiful day it was.  Then I came inside, started the second load of laundry, and threw together the dough for two loaves of bread--enough to last us for about 2--3 weeks, at the rate we normally eat bread, so at least one loaf will wind up in the freezer.

After that, I put my feet up for a bit for coffee and a bagel, read a book, and hung out that second load of wash, by which time it was time to punch down the risen bread and form it into loaves.  While that was going on, I warmed up last week's vegetable stew--made with the whey from last week's Neufchatel cheese and the veggies we hadn't eaten from the garden and CSA share last week--and went out into the garden to get some salad greens to supplement the kale in the farm share.  We've got an embarrassing amount of bok choi, even given the predations of cabbage worms and the fact I've harvested about one a day to go into our lunches for school (rice and beans and some kind of vegetables, generally speaking) but there's a frost warning for tonight, so I picked some of the still immature green leaf lettuce, which may not survive the night, as well as some mustard greens and an icicle radish.  Threw in a bit of cilantro, too, just for fun, came back inside, added alfalfa sprouts, and served up soup and salad for lunch.

Regrettably, I decided that the remains of the autumn olive cobbler I'd made, then frozen, before our camping weekend, and thawed last week, was now too far gone to save, and I consigned it to the compost heap.  When I went outside to add it to the pile, I had a chance to wave to my neighbor Joyce, and ask about her health; she was raking leaves, but I know she has had cancer surgery recently, so I was anxious for an update.

Meanwhile, back in the house the newly-formed loaves of bread were rising, and after I did 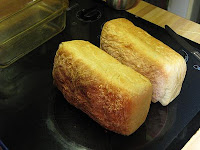 up the lunch dishes, I threw together a low-fat chocolate wacky cake to bake while I waited on the bread.  More coffee, more reading...  took out the cake, baked the bread, and here I am, writing this with the house smelling like chocolate and fresh bread.

This week's groceries, aside from our garden and CSA shares, will be the milk, butter, cheese and eggs from the coop.  Admittedly, we'll also be using canned beans, bulk rice, pasta, and canned tomato paste to supplement the fresh, frozen, and canned produce we put aside this week and over the summer.  But we've seen our grocery bills go down this year, not up, and I have to tell you, my house smells wonderful, and we eat like kings--vegetarian kings much of the time, but still... not much room for complaint.

And if we do get to craving some meat?  We've still got about 3 lbs of goose (drumsticks and wings) and a similar quantity of goose sausage we put up last spring.  A goose dinner whenever I wish--what royalty could ask for more?

What's more, it's fun.  It's satisfying.  And, while I know that there are a lot of people who don't enjoy cooking and don't enjoy gardening, it has been very satisfying to garden and to learning what to do with each season's produce.  And there's a change in how I approach my food and my home that goes beyond changing recipes.  There's a shift, and it's not one that has to do with an intellectual desire to eat seasonably.  More than anything, perhaps, it's a change of attitude--learning not to ask the question, "What do I want to cook, and what ingredients do I need to buy in order to cook it?" but rather, "What do I have on hand, and what can I cook with it so as not to waste anything?"

Making the most of what I have.  So, yeah, we buy coffee, and our spaghetti noodles are not organic.  I may change a recipe so that it's less gourmet, perhaps.  But it's also going to be more in keeping with where I live, and what the land is producing where I live now--this year, as opposed to other, hypothetical Octobers past.  This year, I have no winter squash--the field where they were growing was flooded by the hurricane--but I have an abundance of leeks.  So this year, I will not serve squash soup... but I will put sliced leeks onto my salad, along with the last of the lettuce, the mustard greens, alfalfa, and kale.

I'm adding value to ordinary things: vegetables, eggs, milk.  But I'm also relating to my world in a different way.  I feel more a part of the world I live in. And I like it.  And I love my Saturday farm--whether it really is "farming" or not.

Donna said…
Thanks, Cat, that's so heartening and inspiring! I can almost smell that bread - it's too late in the year to suddenly start gardening, but I might just have to bake some bread!
I've been lurking for a long time and am currently reading as fast as I can through the archives, so it's nice to see you still posting. :-)
3:21 PM

Thanks for this. I particularly like your definition of productivity: the willingness to substitute patience, skill, and thrift for consumption.

Nothing appeals to me more than finding that my family, friends, colleagues and I can produce what is of true value out of our own gifts and steadfast efforts.