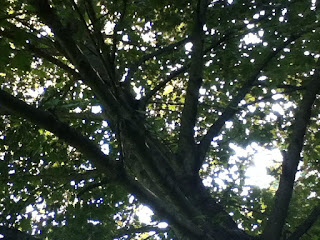 Outside my window, I can hear the forest breathe. It is a hot day–one of the last really hot, humid days of a New England summer.  Thunderstorms are predicted for the afternoon, and they will be fed, in part, by the moisture that the trees–swamp maple, sugar maple, white oak and hemlock–are transpiring into the air above the woods.

The forest is breathing, breathing out in a long, deep, sighing exhale, and its breath passes over the and through the tops of the trees. And through my window, I hear the breath of the land. I hear the life of the land.

Between the waves of wind that ruffle the leaves, I hear the soft, high music of crickets, singing their death song to the summer.  I hear the hawk perched in the top of a white pine.  I hear a different set of sighing waves, as traffic passes along the road beside my house.  All these things are distinct, and all these things form a whole. The life is in the parts, the individuals; the life is in the whole, the totality.

I am a human.  I see myself, almost always, as an individual human consciousness, caught up in my lonely envelope of flesh and skin.  But the car I drive breathes out its carbon (as do I; as does my house, the hawk, the crickets) and the trees breathe in what of it they can.  The rest rises, on the outbreaths of the trees, into the atmosphere.  It traps a little more of the heat of the sun, raises the temperature of the oceans, alters the cycle of the seasons, the patterns of climate… My car, my carbon, feeds the heat that draws out the breath of the trees, feeds the heat that intensifies the power of our storms, brings on the heat and humidity of this morning, and very likely, the flash floods and winds of this afternoon.

I see myself as an individual.  But I am still a part of a whole.

Each human, cricket, hawk, and tree has their own life.  But they remain a part of the whole.  We breathe together, whether we know it or not.  We are many–and we are one.

I am a spiritually bilingual writer.  As a Pagan, I sense the life within all of the parts.  As a Quaker, I listen to the life of the whole.

I became a Pagan (a Wiccan, originally) shortly after the birth of my only daughter, in 1986. I became a Quaker shortly after the destruction of the World Trade Center, in 2001.  Neither of those decisions was “notional,” as Quakers would put it; neither of those decisions was a result of a purely reasoned and intellectual process.  In a very real sense, my religions chose me; I did not choose them.  More than rational Powers have guided my journey.

The more than rational Power I experienced within my body while it was shaping a new human life won me to Paganism.  It was the physical, sensual experience of living in a life-bearing woman’s body that called me to Wicca.  My body taught me it was more–I was more–than I thought I was.  My body taught me that physical being is holy, and that you can turn to your body for illumination.
What that illumination gave me, as I sat suckling an infant and reading Margot Adler, was Witchcraft.  I am a Witch because my daughter’s life growing inside my own taught me to be.  There were additional, formal lessons eventually.  It was not my body alone that taught me these ways… but those are details. It was my body, first, that taught me to notice spirit… everywhere.

Those deer are individuals.  And they are part of a shared genetic heritage… and distant relatives of the Megaloceros giganteaus, extinct since the last ice age and never present on my continent, and of the red deer and Irish elk that have become so interwoven with European legends and myths–legends and myths that have seeped into my subconscious, and that take shape sometimes as the Spirit of the Deer or a the Horned God of the Hunt.

Sometimes the deer that I see is only that individual deer.  Sometimes it is that deer, and the spirit of the land on which we both live.  And sometimes it is a messenger of the god I call Herne, and He has come through a messenger, specifically to speak to me.

How do I know which spirit is which?  I use my Witch’s sight, the same inward vision that first called me to become Pagan.  I rely on a form of gnosis… and sometimes I am wrong.  Of course, as I have come to understand, seeing the world only through the eyes of reason–that will be wrong sometimes, too.

Sometimes, I understand that the sacred lives within the individual.  Sometimes, I understand that it lives in the interrelationships between many individuals–a herd of deer, a forest… a planet. Sometimes, those interrelationships themselves stand out in distinct patterns of individuality–as distinct as you or I.  (Are you an individual?  Ask the bacterial cells that live within you–ten times more of those than of your own!  And yet, you will say yes, and it is true.)

With my Pagan vision, I can see shapes of individuals, of beings larger than we are.  These shapes have names that humans have given them over time.   For the sake of argument, we can call them gods.

We do not make them, these beings.  Perhaps we shape their stories–certainly, we write them down.  Who are they, really? More than our imaginations. More than we understand.

Eventually, it began to feel labored, even precious, to go out of my way never to call that Spirit “God.”  It began to seem less than faithful, to change my words to reassure my hearers, “I am not a monotheist!”  And I am not. But sometimes, I speak with the same words as those who are. 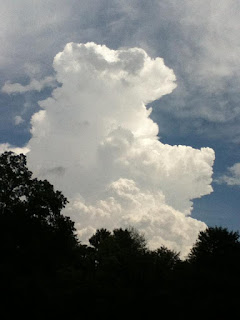 What do I mean by “God”?  Not a white guy with a beard, sitting on a Michelangelo cloud.  Not a person at all, though not an it, not the mere inanimate, unconscious physical fact of existence.
I mean something much more intimate than that–not a person, but personal.  Aware.  Large. Interested, and loving.  I mean that, because that is what I felt, what I feel, when I sit in Quaker worship.  Something there is, that lives in everything that is. Something there is that loves us, and wants us to be kind.

What I mean when I say “God” is the wind outside my window.  The wind that is more than my body or the woods, that shapes our weather and shapes our world… but is also the the living breath of crickets, hawks, and trees.