By Cat C-B (and/or Peter B) January 18, 2016
I remember when Martin Luther King Day was first declared a Federal holiday, how Arizona’s Governor Meecham repealed the previous governor’s establishment of the holiday there, and how Jesse Helms led opposition to it in Congress, on the grounds that King was unpatriotic, a Communist sympathizer, and not “important” enough to be honored with a holiday.
We all knew what they really meant, just as I knew what the childhood friend who dismissed it as “a black holiday” was calling black people in the privacy of his own mind. It was the 1980s, and it was pretty clear that what people who had trouble with celebrating Martin Luther King Day really had trouble with was racial justice.
Which is why it may seem odd that now, in the year 2016, I’m having some trouble with Martin Luther King Day myself.
One of the more painful things I’ve observed, since I began speaking out against racism, is the degree to which white people have taken a sanitized, safe, domesticated version of Martin Luther King into our hearts.  I wish I had never seen this, but I’ve actually seen it more times than I care to count: a black person speaks out against present-day racism and violence, and a white person attempts to shame him into silence by invoking Martin Luther King and what the white person is pleased to call “non-violence.”
What about riots?  The white person asks.
You’re so angry! The white person accuses.
I can’t support Black Lives Matter, the white person complains.  It doesn’t have the moral leadership of Martin Luther King.
Or–my (least) favorite: What would Martin Luther King think of what You People are doing?  (To which the rational answer–which I have seen made–can only be, “We’ll never know; You People killed him.”) 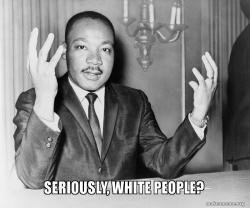 And the definition of non-violence gets extended, almost infinitely, to mean no disrupting political rallies, no blocking traffic, no making unpleasant scenes at the mall.  “Non-violence” has become code for white people refusing to listen to live black voices, in the name of a distorted version of a man whose actual words we rarely bother to hear, beyond a sound-bite or two from the “I have a Dream” speech.
Are we “honoring” Dr. King?  Or are pretending that his death marked the end of racism in America?  What are we really celebrating here–his non-violence, or our hope to continue our lives without being inconvenienced by protests, shamed by justifiable anger, or disturbing life inside our comfortable white bubbles?Nonviolence–real non-violence–can be assertive and disruptive as hell, something I notice a large number of us white folks don’t want to acknowledge.

Likewise, it seems as though it’s inconvenient for those of us living in comfortable privilege to see that marginalization is violence… poverty is violence… indifference to oppression is violence. In fact, there’s a whole range of ways it is possible to be violent in our passivity.  I hate to see us dumbing down what nonviolence really means, bowdlerizing the legacy of Dr. King, in the service of our immediate emotional comfort.
.
I’m especially annoyed when those who don’t believe that non-violence applies to any other conflict in the world believe that, uniquely, black Americans should embrace non-violence. (Bombing the crap out of Middle Eastern countries in the name of peace is just fine, though.)
.
And also? to those who practice non-violence, but believe that disruption of the daily routines of the privileged counts as violence? Yeah, I’m pissed at you today, too.
Peacefully, non-violently pissed. But I sure wish we wouldn’t make Martin Luther King into the patron saint of tone-policing black activism.  Because that… is completely messed up.