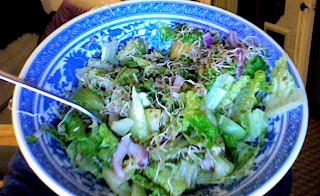 I started by baking my own bread, in an attempt to get affordable bread without all the plastic packaging.  One thing led to another, and I returned to making my own pie crusts, as I had in college--only this time, making one to use now, and freezing the second--buying local produce and freezing it, then pickling it and turning it into jams and jellies, and finally into getting pretty much all of my produce local and organic.

But it's almost winter here in New England, and my favorite farmstand has closed for the winter, and I'm reluctant either to give up fresh produce, or to go back to buying the stuff hauled in from California, plastic-wrapped and ready for me at the local supermarket.

In fact, if all goes well, tonight's salad may be the last grocery store lettuce I'll need.

My fingers are firmly crossed; I've never been much of a gardener, though I lived with one as a child, and I know how much better home-grown anything tends to be.

But I've got this south-facing window.  And some packets of lettuce seeds.

Lettuce does not grow well in warm weather, and round about August, it began to be hard to get local lettuce of any kind, organic or otherwise.  And I thought about that for a while, and took advantage of the remaindered, end-of-season lettuce seeds for sale in the local stores.

I also decided to take into account my personal brown thumb, and I went ahead and invested in a couple of self-watering planters.  And for the past two weeks, I've been anxiously watching over the gradually materializing glow of green leaf lettuce filling those two planters.

I'm almost ready to start using a few thinnings in a sandwich or two.  And so far, they're looking good: very much like, well, young lettuce.  I am hopeful that I'll soon be able to replace the non-local romaine in my salad bowl with the ultimate in local food, stuff from my own windowsill.  There's plenty of sun, and, thanks to chilly New England nights and our stinginess with our fuel bills, it's just about the perfect temperature for lettuce in our house at night.

We're not stopping there, however.  I'm also sprouting alfalfa seeds that I ordered from an organic online source.  It's a little bit of a pain, to rinse them each morning and evening, just before and after work, but the yield is pretty amazing.  For $7.50, I have enough seeds to last me all through the winter, and then some.  A tablespoon of seed fills a quart jar with sprouts in about a week.

Supper tonight?  Besides the store-bought romaine, I've got about 1/2 cup of alfalfa sprouts, some nice local red onion, and the tart green tomatoes from my neighbor's garden.  (It turns out that people who grow things in the dirt will give them to you, just to be nice.  And it turns out to be fun to give things back--stuff like pickles, and bread.)

This has not been a plastic-free adventure.  The planters are largely plastic, and the jar the pound of alfalfa seeds came in was, too, alas.  And it will take a while before the plastic used in producing and packaging these items, as well as the petroleum consumed in getting them to me, will be balanced by the impact of the in-house winter veggie production.

And the lettuce is experimental.  Perhaps it will not work.  (In which case, I'll try my hand at organic microgreens next!)

But there's a particular satisfaction in finding ways that my initial prompting, to try to reduce our plastic waste, has been leading us deeper and deeper into concerns like neighborliness, local food, sustainable agriculture, and now, the joy of a tiny windowsill garden.

Tomorrow, I may eat the rest of that soup I made a few days ago, with local squash and onions and peppers in it.  The day after that, perhaps I will plant the Chinese chestnut saplings given us by a friend.

And someday, perhaps I'll be eating even more locally than I did this summer: from my own backyard.

One small change can lead to others.  (Excuse me, now.  I've got a salad to finish.  Yum!)