Since My Last Confession

By Cat C-B (and/or Peter B) October 02, 2010
OK, so I'm not Catholic.  But it has been a very long time since my last confession here--meaning, the last time I posted our weigh-in of plastic trash and recycling.  (Why do I count recycling?  Because, although I do recycle everything I can, plastic is not like aluminum or glass that can recycle endlessly; plastic actually "downcycles" and becomes, essentially, hazardous waste for thousands of years after only a handful of reuses.  So it all counts, sooner or later.)

The last time I posted our weigh-in was back in July: a two-week tally of 3 lbs. 1 oz.

In the ten weeks since then, we have generated 6 lbs, 7 oz. of trash, which would average out to about 17 lbs of plastic waste per year per person for each of us... in comparison with an American average of over 80 lbs per person.

Of course, I'm not counting my totaled automobile in that amount.  I have to hope that many of the plastic parts will be salvaged, and used on other cars.

But I am counting the dead twenty-year-old eggbeater that we disposed of last month.  And we're still coming in with a lighter yearly average, based on the last few weeks, then we did at the beginning of the project.

So, while I compromised the weigh-in part of the no-plastics diet, Peter and I did manage--mostly--to stay on it.

So, what made up our trash over the past two months?
I will admit that I have on a couple of occasions not only forgotten, when out at a restaurant with friends, to ask for no straws or plastic containers (for sour cream, salad dressing, etc.) but even to bring the offending item home with me at the end of the night.

However, I've come to appreciate the way that requesting no plastic turns into a kind of opening to witness to the importance of reducing plastic trash.  Not because I make speeches, but because the waitress asks about it. 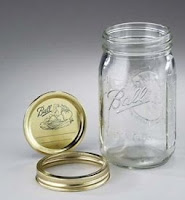 I can see why No Impact Man chose to use a canning jar for his commuter mug, too.  I mean, I'm very fond of my stainless steel mug.  But there's no question that using a canning jar makes its own quiet statement about the need to challenge and change our current consumerist culture.

That's it for now.

Heather said…
I'm trying to find ways to reduce the use of plastic in my own life, so I find it helpful to read about your struggles with this. One thing that caught my eye in this post was your mention that you no longer use toothpaste and deodorant that come in plastic packages. The area of personal hygiene is one that seems to be particularly hard to reduce plastic in, so I was wondering: Where do you find these products in non-plastic packaging, and how do their prices compare to those packaged in plastic?
Thanks, H.
11:17 PM

Cat Chapin-Bishop said…
Hey, Heather,
Sorry about the delay. I've been working some really long hours this month at the school where I teach: huge stacks of essays have pretty much eaten my life.

I have not been able entirely to eliminate plastic from the toothpaste category. I know, there are those who use baking soda for that, but I'm fifty, and my teeth show signs of wear already; baking soda is supposedly rather harsh on dental enamel.

However, Tom's of Maine puts out good toothpaste in a mostly metal toothpaste tube! It's easily as good as the big companies, and quite competitive for price, too. There's still the cap, but it's an improvement!

I know there are people out there who can do without deodorant, also, but I'm not one of them. Putting it bluntly, I'm stinky. (Unlike my husband, who smells like a rose no matter how hard he works. Nature is not always fair...)

At first I tried something called a "Thai deodorant crystal" I bought at the coop. Not only do I have no idea what it's made of, not only did it come encased in a thin shell of plastic (and with a real little wicker basket it sits in between uses) but it doesn't really work.

Just this week, I've begun using baking soda, which I'm storing in a glass jar in the bathroom, and applying with a big cosmetic brush. It's a trifle messy, so I try to apply it over the sink (where it is useful for cleaning the sink when I'm done) but otherwise... SCORE! This seems to work. Not, admittedly, as well as the nasty chemicals in plastic tubes I used to use... but reasonably well.

Cat Chapin-Bishop said…
(By the way, Heather: I love your blog! I follow it on the sidebar at my Quaker Pagan blog, in case you never noticed. *smile*)
11:53 AM

Pallas Renatus said…
Do you have any CVS pharmacies in your area? We've had recyclable prescription bottles for ages. The bottles and caps are even marked individually so you can recycle both, which is nice, considering how recycling plants will just chuck out the unmarked plastic caps you usually come across.
10:48 PM

Cat Chapin-Bishop said…
Good tip, Pallas! I will ask. If the local branches do not have this ability yet, perhaps they can get it with a little push from some friends.
8:58 AM