A Different Kind of Knowing 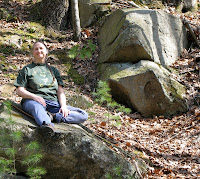 The woods are so much more naked now than at any other time of year.

Yesterday, we had an April Fool snowstorm that left enough on the ground to close the schools.  Today, it is nearly all gone--only a few rags remain in shady corners of the woods to show where it had been the day before.  Today was warm, and sunny, and though I really should have been doing a hundred other things, I stole away for two hours late in the afternoon, to hike in the naked woods.

The wonderful thing about this bare and barren time of year is how far I can see through the trees. Even from the house, the effect is noticeable, but in the deep woods, it is easy to leave the established trails and explore.  Deer paths, not even noticeable once the green comes out, are almost as clear and plain as highways--highways marked by darker brown along the ground, where their droppings slot between the rotting leaves, and by drifts of hemlock needles, chewed off the nearby trees in such profusion, it looks as though a mad topiarist has been at work off in the middle of the woods.

I am becoming quite familiar with stretches of wood I had not even entered a year ago.  There's a spot where an old woods road--which will be obscure and hard to follow in a month or two, but at present is practically an airport runway peppered with stumps and mountain laurel scrub--passes between granite boulders the size of golf carts and small sheds.  One of these huge rocks still bears the scars of an attempt by some long-gone farmer to split it.  I cannot imagine why.  To clear the slope for farming?  So many other rocks remain, it hardly seems worth the trouble.  To obtain building stone?  Surely there are rocks as useful downslope, nearer to whatever needed rock.  It remains a mystery to me--and a landmark.

Today I took the faint tracing of a deer track that continues when the woods road fades away all the way down to the flat and shadowed valley at its foot, a grassy space of interlacing streams, quiet and secret-seeming (though I have seen the tracks of other hikers there).  It rests between two ridges of wooded hillside, and today for the first time I made my way up the steep slope across the farthest stream, past stands of mature beech and oak, as well as the everpresent hemlock.

Over the crest of the hill, I saw the sky.  Seeking further, I glimpsed two houses through the trees, and a little ways from both,  a fenced-in hillside pasture.  The ground fell away steeply from the little gate at the top of the pasture, and the view was astonishing--waves of bruise-purple wooded hills, punctuated by the taller, greener spikes of white pines, and beyond those, the startling blue of the Mt. Holyoke range of hills, far away against the eastern sky.  A deeper shade of blue may have marked the Connecticut River, winding past the mountains.

The sun was at my back, and I could see, far away across the valley, white spires of churches, and down the hill from me, the occasional flash of sun-glare, caught by a passing car at the road at the bottom of the hill.  No sound rose up to me from where I sat, however, and the little farm whose pasture it was looked like a toy farm, almost to pretty to be real.

I have not been so startled by the beauty of a view since I left Vermont.  Both the height and the slope of that pasture reminded me of Vermont.

I sat for several minutes, letting the sweat of my scramble up the slope cool, appreciating the faint scent of woodsmoke on the wind, and hearing alternately the rush of wind through hemlocks, and the negotiations of a pair of chickadees.

I thought, before we bought this house and moved here, how much I would like the chance to live in the woods again, and know again as I did once as a child how every fold of the land looked and felt at every season of the year.  I think so still, and I notice how much more of the world around me I can track consciously than I could as a child.  Now, as I walk in the woods, I can identify species of leaves on the ground, different animals' droppings, tracks, and signs, and a little of the geology and history that is written on the landscape that I see.  I may guess which stumps are oak, and which are hemlock, and I have theories about what may have caused a scar on a tree trunk, or the odd shape of a pine.

But there is another, deeper, wordless kind of knowing of the land, and that I had when I was young, as the deer have it still.  That is the kind of knowing I am seeking for--the kind of knowing that runs deeper than words, that recognizes the beloved even in the dark, by touch, by smell, by unconscious bonds of relational knowing.

I think it will take a lifetime to properly learn even this one small New England forest.

I'm grateful for the chance to begin.

dcseain said…
What a lovely tale, and lovely imagery. Thank you.
12:00 AM

Unknown said…
A wonderful tale indeed. I'm in love with Vermont myself; hopefully I'll get the chance to relocate there someday.
7:54 PM

Libelula said…
This is such a peace-filled and uplifting post. All the blessings that surround you that are so apparent to your eyes... It is beautiful.
12:30 PM

Bright Crow said…
Nothing grounds me more than the sort of walk you describe.

Merry Stanford said…
Cat, I hear the voice of the woods in your post. Thank you for sharing her message with us. My experience is that all creatures of the earth, biological and nonbiological, have these voices that we human must listen to, if we are to grow into our fullness as a species. Blessings on your future walks with and in your woods.
2:37 PM