Peter in Kenya, Part II: A Society In Upheaval

I’ve been to Kenya. That doesn’t make me an expert. I haven't read the history books (though I’ve had a couple of good titles recommended to me). What I know about the place, I know from being there for one short week and speaking with a handful of people, mostly my friend Eden Grace, but also several Kenyans who I got to know at least a little.

One of the drivers who was hired to shuttle us around was a man named Anthony. Our party had divided up into small groups for the day, and Anthony drove two students and me to a village to observe an outreach maternal and child health clinic being run out of a Friends Church. While we were there, since we were in the neighborhood, he said he wanted to show us his grandfather’s farm.

We piled into his truck again and he drove us out to the house where he grew up (yes, it’s the little hut in the photograph, with mud walls and a corrugated metal roof) and the plot of land around it that he inherited. He was very proud of his farm, though he and 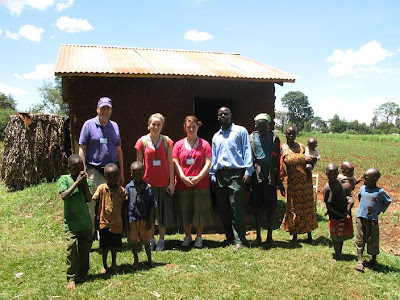 his family live in town now and he rents the farm out to a family that works the land for him. He took us around to see his fields of corn, the little stream that provides all the fresh water, and also the graves of his grandfather and grandmother. Kenyans usually bury their loved ones on their own land, and you almost never see anything like a cemetery. He had a crew of men working on building a structure of some kind over the graves. They had only done the foundation, but it looked at least as large and as substantial as most of the houses we’d seen.

Anthony’s grandfather had had four sons, so Anthony inherited only a quarter of the original farm. This is happening more and more in Kenya. Families have been dividing up their farmland among their sons for several generations now, until the plots of land are no longer large enough to sustain a family. Anthony is unusual in that he moved his entire family to a house in town. What happens more often in rural Kenya is that the husband will be forced to live in the city for eleven months out of the year, earning money to support his family back home.

Polygamy was once legal in Kenya. It isn’t any more, but polygamous behavior continues, and the economic necessity for husbands to live apart from their families is one reason why. Men from the country take on disposable girlfriends in the city. In a very real sense, all that was accomplished by outlawing polygamy was to strip these women, who would once have been second and third wives, of any legal rights or protections.

Kenya has been going through significant social upheaval ever since the conquest by the British at the end of the nineteenth century. People who had been nomadic were suddenly restricted to whatever land they happened to be on at the time of the conquest. Common land that had been used for grazing was made private property. Subsistence farmers were forced to pay a hut tax in hard currency, which forced many of the adults off of their own land and into the British plantation system where they could work for cash wages.

When the British finally left, the land was returned to the Kenyans, but with no regard for who had originally owned it. Population pressure is now making rural farms unsustainable. And in a society where they elderly have traditionally been cared for by their children, AIDS is wiping out an entire generation, so that instead of being cared for, many of the elderly are struggling to raise young grandchildren. Demographic and economic forces are shifting underneath Kenyan society like tectonic plates, and I cannot envision what the social landscape will look like in another fifty years.

After we saw his farm, Anthony took us back to his house in town. His family runs a brick-making operation in their back yard. This and other cottage industries were first developed by missionaries during the time of British rule as a way of providing the rural populace with cash income and an alternative to being displaced onto plantations.

Anthony brought us into his living room, introduced us to his wife and children, and said it was the first time he had ever had “guests like you” sit with him in his house. It felt like a real honor.

Vivienne Moss said…
I am loveing these articles. Can't wait for the next.
9:04 AM

Peter Bishop said…
Glad you're enjoying them. They're going to get a little more introspective as they go on.
1:51 PM