I said that Christianity in Kenya hasn’t sponsored a single pogrom since it was first introduced in 1902.

There are two possible exceptions. While Kenya hasn’t seen much religious warfare between rival sects of Christianity, Kenyan Christianity did supplant an indigenous (Americans might call it “Pagan”) religion. I know almost nothing about traditional African religion. I am told it was animist and that it involved ancestor reverence (both of which sound fine to me) but also that it was quite misogynistic. There were dietary taboos that effectively prevented pregnant women from getting protein. And it was the coming of Christianity that ended the practice of female genital mutilation.

If I were more connected to Kenya, it would be incumbent on me to learn more about African indigenous religious practices. As a panentheist, as one who reverences Mother Earth, I have an obligation to learn about the ways that the Earth has spoken to the people before me who have lived where I live and worshiped where I worship. I may find, as time passes, that I already have that level of relationship with the Kenyan soil. 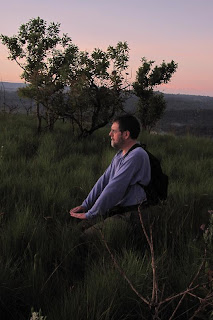 Our final day in Kenya, I got up at 5:30 to hike with my students to the top of a mountain to see the sunrise. I left them with our guide and walked a little further up the trail to the very summit, where I knelt and took the pentacle from around my neck and pressed it to the ground, asking the blessing of Mother Earth, and then raised it so that as the sun rose, its light reached me through the intertwined points of the star and their encompassing circle.

Yes, I think I may already have that level of obligation.

I won’t necessarily like or approve of what I find out. Earth-centered religions aren’t immune from becoming destructive and oppressive, any more than Christ-centered religions. But I should learn at least a little something about it. My level of ignorance right now is profound.

The other area where I am not certain that Christianity is blameless is around the Kenyan attitudes toward homosexuality.

It is fiercely difficult, as a visitor from a wealthy, privileged, industrialized nation to go to a place like Kenya and understand what you see. Westerners who’ve lived half their lives in Kenya working to solve that country’s problems will tell you that it takes ten years (some will tell you forty) to even begin to see what the problems are, never mind the solutions.

In America, gays and lesbians are visible. We’ve all had the opportunity to see them form stable, loving relationships and even raise children. The struggle for GLBTQ rights has been a civil rights issue, embracing the same goals and the using same tactics as the fight for equal rights for racial, ethnic, and religious minorities and for women. Hearing about intolerance of gays and lesbians in African churches, many Americans’ first reaction is to want to take the fight on the road, as if we could arrive there new on the scene and with nothing but pure intentions and simply set things right.

Ironically, that’s exactly what the early missionaries did a hundred years ago: sweep into a culture they didn’t understand to impose their own values and ideals.

Kenyans can be forgiven for a certain amount of suspicion and ignorance around GLBT issues. Gays and lesbians across most of Africa are so deeply closeted that very few people would be aware of ever having met one. Like everything else in Kenya, questions about gay rights are complicated by its history as a former colony of the industrialized west. Many third-world countries have been destinations for sexual tourism—wealthy westerners traveling to impoverished parts of the world to buy kinds of sex that are illegal at home, like child prostitution.

I did not get to see the question of gay rights come up while I was in Kenya. It is certainly tempting to assume that Christianity would be supporting an attitude of hate. Many American churches were certainly full of hate when they came out in favor of neighboring Uganda’s death penalty for homosexuality a few years ago (mercifully, that legislation has just been allowed to expire). But I suspect that African hostility toward gays and lesbians is much older than African Christianity, and I’m fairly certain that that hostility was hardened by a century or more of colonial occupation.

I also believe that missionaries in Kenya—at least the contemporary Quaker missionaries—have been more a force for tolerance than for homophobia. I may be proven wrong when I read more history, but that’s my impression now.

American Quakers in New England Yearly Meeting have been agitating for years around a personnel policy in Friends United Meeting drafted by Quakers from all around the world, including Americans and Kenyans, that affirms the civil rights of all people, condemns violence against homosexuals, and recognizes “diversity among us on issues of sexuality,” but excludes noncelibate gays and lesbians from any positions of leadership. Many in NEYM advocate severing all ties with FUM, or at least withholding financial contributions, because of that discriminatory policy.

In the American south in the 1960’s, economic boycott was an effective tool for ending institutionalized racism. In dealing with Kenyan Quakers today, economic boycott would be a blunt instrument with which to bludgeon our brothers and sisters. Worse: we talk about withholding American money from Kenya on moral grounds, when so much of the American economy was originally built on the labor of enslaved Africans.

I once heard Noam Chomsky use the phrase “liberal humanitarian imperialism,” and I thought at the time that it was a complete oxymoron—a contradiction in terms. But it’s not.

The solution to homophobia, at home and in Kenya, is persistent, faithful witness around the right order of same-sex relationships. Yes, the legal battles have to be fought, the petitions signed, the votes cast, but the driving force behind any struggle for liberation is and will always be the recognition of the basic humanity of those crying for freedom.

Alison Leigh Lilly said…
Peter, I just want to say how much I value these blog posts of yours. They give insight into just how complex the world of religion and politics (and their overlap and mutual exchange) really is, and they serve as a wonderful reminder of how action and choice - on every level, personal to communal to global - must be grounded in a spirit of compassion and respect. Thank you for these, and I look forward to the next one!
11:32 AM