The idea started a few years ago. My Advanced Placement Biology class was discussing AIDS and health care in the third world, and I mentioned that I knew someone who administered a couple of AIDS hospitals in Kenya. One of my students made an offhand comment about how it would be fun to go out and visit and see, and when I told this to Eden Grace at that year’s Sessions of New England Yearly Meeting, she said, “Yes! By all means, come! Bring your students!”

It was a pie-in-the-sky idea, and nothing came of it for several years. But when I mentioned it to last year’s AP class, their interest was seriously piqued. Could it really happen? I said it was unlikely, that there were about 800 things that would have to line up just perfectly for a trip like that to happen, and if it did, it would be very expensive, but I’d make inquiries.

An hour later, when my tenth-grade bio students came in, they were literally jumping up and down saying, “Mr. Bishop! Mr. Bishop! Is it true?!? Are we going to Kenya?!?”

A year and a half and 800 detailed arrangements later, nine students, two parents, and one other teacher arrived with me in Kisumu to spend a week touring the Friends mission hospitals at Kaimosi and Lugulu, doing rotations and shadowing the doctors, nurses, pharmacists, and other clinicians. The purpose of the trip was to experience third world health care, but along the way we learned a tremendous amount about Kenyan society and African culture. Although our host was a Quaker missionary, the trip was entirely secular. Still, for me the visit also brought deep spiritual insights.

The culture shock was intense. The friendliness of the people was downright unnerving. We had a seven-hour layover in Nairobi, where we spent the night camped out in a shabby little airport coffee house, playing Scrabble and studying for the AP Bio exam. A man walked up to us and said, “Hello again! I know you, yes? You’ve been here before?” He shook my hand, asked me all kinds of questions about where we were from, and it took some convincing before he accepted I had never set foot on the continent of Africa before. In America, someone like that would have been a panhandler, a con artist, or a shill for a thief, but in Kenya he was just a friendly stranger, and he thought he’d met me before because, quite seriously, all mzungu look alike. 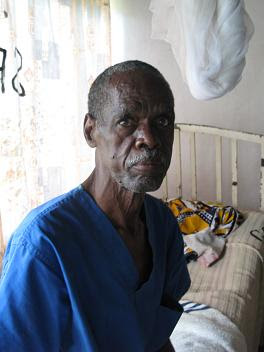 I began the week with the instincts of a tourist trying not to be tacky: Keep your eyes down and don’t stare at the natives or shove your camera in their faces; be quiet and polite and don’t go trying to show off the two or three words of Swahili you’ve learned as if that made you bilingual. My first day at Kaimosi hospital, I approached some of the patients at one end of the men’s ward and asked them, shyly, if they minded if I took some pictures. They smiled and said, “Oh yes, that’s fine.” I took a couple of pictures and left, and then an old guy in blue pajamas came shuffling out of the ward and said to me “Some of the men have been complaining…” and I thought, Oh God, I’ve overstepped. I’ve invaded their space and been a pushy tourist. “…that you didn’t take their picture as well.” I blinked. Oh! I went back in and photographed the rest of the patients and talked for a while with the old guy, whose name was Wilson. In America, he would have come across as a crazy street person, but once again, in Kenya, he was just an old guy who felt like talking. I was working so hard at suppressing all my western instincts around boundaries and personal space that when he said “I want to know more Americans. Can I have your phone number?” I was completely at a loss for how to respond, and I actually gave it to him and watched while he programmed it into his cell phone. And then asked myself, Oh crap, what did I just do?

By the end of the week I was adjusting. I pointed my camera at groups of strangers, and invariably they smiled broadly and waved. I learned to walk up to people with a great big smile on my face and announce, “Jambo! My name is Mr. Bishop! I am a biology teacher from America! These are my students! We are here to learn about hospitals in Kenya!” which always elicited an enthusiastic, “Karibu! Karibu Kenya!” (Welcome! Welcome to Kenya!)

Eden has talked many times about how volunteers often come to Kenya with very American ideas about what we think the Kenyans want and need. We come wanting to build schools and wind up taking away construction jobs. She told us of an American volunteer at one of the hospitals we visited who spent weeks sewing privacy curtains to go between the beds in all the wards—only to have the Kenyans knot them up out of the way. Kenyans don’t place the same value on privacy that westerners do. An American’s instinct, upon seeing great poverty, is to reach for our wallets, but what Kenyans mostly want from western visitors is to make connections—to have us sit with them, talk with them, sharing meals and stories and time.

CLF said…
You have already lured me into your web... am looking forward to hearing more of this story... It sounds like it was a profound and life shifting journey.
4:49 PM

Peter Bishop said…
I'm actually finding it very difficult to write about. I keep getting the details and missing their profound significance, and leaving unstated things I think are obvious that totally aren't.

Vivienne Moss said…
Like CLF, I can't wait to read more. Thank you for sharing your experience in Kenya.
1:46 PM

Angie S said…
Mr Bishop,
Here in the DR I'm encountering the same issues as you did with the effects of American influence and aid in the developing world. We have seen bateys, extremely poor communities where Haitian sugarcane workers live, that have been drastically improved by USAID work, but most of the construction have been done Dominican or American workers, not Haitians. On the other side, Paul Farmer's Partners in Health model of training Haitian doctors to work in PIH's clinics works so well and uses little to no American or European doctors doing clinical work. (If you haven't read Mountains Beyond Mountains, do it. It's awesome.) There's always that fine line concerning developed countries working in the developing world, in health and other sectors as well, and it's so hard to decide how much involvement is too much.

Sorry this comment is so long! It's a fascinating subject for sure, and I'm still super jealous that our class couldn't go. - Angie
9:18 PM

Peter Bishop said…
Hi Angie,
It sounds like you're doing some pretty awesome stuff yourself. I'd love to hear more about it.
9:15 PM