Peter's Spiritual Journey, Part I: A Refugee Looks Back

By Peter Bishop June 20, 2011
The Spiritual Journey so far:
Prologue I: Peter In Kenya
Prologue II: A Liberal Christian With Balls
Part I: A Refugee Looks Back
Part II: Leaving Home
Part III: Who Am I?
Part IV: Learning About Race and Gender
Part V: Watching My Students Drown
Part VI: Animal Bones 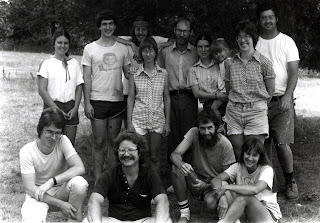 My spiritual journey has not been a straight line. It has looped and twisted, sometimes out into non-Euclidean n-dimensional hyperspace and sometimes down into Hell and out the other side. But it has had two or three big turning points that were defining moments. You know, like when that Mesopotamian storm god first appeared in the whirlwind and said to Abraham, Go now, leave your family and your home and wander in the desert. Don’t worry about where you’re going; I’ll let you know when you get there.

So I’m going to tell my journey in medias res, beginning with a turning point at a Southern Baptist commune in rural Georgia when I was 22 years old and discovered I could no longer be Christian.

The thing is, they were actually very nice fundamentalists. They were good, kind, compassionate people doing humanitarian work in the world, with a particular calling to refugee resettlement work. They were actively working to become the best, most righteous and loving people they could be.

I suppose their only failing was that they’d lost the ability to think critically about that process or about their religion.

They were fervently committed to surrendering all their pride and greed and willfulness to God, replacing their own will with God’s will, their own truth with God’s truth, and they turned primarily to the Bible for guidance in finding that truth. And this put them, at the deepest core of their being, in close company not primarily with other good, kind humanitarians, but with other Bible-believing Christians. I mean, sure, there was some overlap between the two groups. A lot of overlap. A great many Christians are inspiring examples of humanitarian compassion.

But where they didn’t overlap—where Christians occasionally came down on the side of bigotry and hate, and the humanitarians had the misfortune to have come from other faiths—their loyalty was clear: God’s truth, not our truth; God’s love, not our love.

This should not have thrown me as much as it did. I came to this Southern Baptist intentional community as a liberal high-church Episcopalian and as a vegetarian organic gardener at Oberlin College, one of the most persistent remaining strongholds of the countercultural values of the sixties.

I should have just gone back.

Instead, I listened to what the fundamentalists said. I don’t mean I took it all in unquestioningly or uncritically, but I listened very deeply. I looked at their arguments. I re-read the Bible through their eyes. I was shocked and horrified at a lot of what I found there, but I could not deny seeing it once it was pointed out to me.

Next came the brainwashing

And it wasn’t even meant to be brainwashing. Like I said, these were very nice fundamentalists. There wasn’t any autocratic leader living high on the hog by exploiting his followers; they genuinely functioned as a community, giving according to ability and taking only according to need and making decisions (at least among the permanent members) through a process that probably wasn’t very far off from Quaker corporate discernment.

They never set out to brainwash anybody.

There are places in the human psyche that few of us ever explore. I’ve never been to outer space, but I’ve read about weightlessness enough to know that there are predictable experiences that the human body and mind will undergo in that condition.

At age 22, I had never lived in a commune, but I’d read about them enough to know there are some predictable experiences there, too. I remember a line from a textbook in a course in Christian Utopias and Communitarian Movements that I took at Oberlin, where a hippie in a 60’s commune said something like, “Man, you’re all inside my head and it’s freaking me out!” Reading it, the year before my own experience with intentional community, my reaction was, Wow, that sounds really interesting. I wonder what that would be like?

That summer, in the thick of it, the sensation was almost physical. My interpretation of Christianity was being remade through the intensity of the communal experience in a fundamentalist setting, and it almost felt like fingers inside my skull, probing down into the sulci of my brain.

I should have just gone home. The problem was I didn’t really have a spiritual home.

Photo: Jubilee Partners Summer Volunteers, 1981
I am third from the left in the back row.

Steve Hayes said…
Look forward to reading the next episode. I once stayed with some people who had associations with Oberlin. Didn't really know it was like that, but they were cool people.
10:31 AM

JACKIE said…
Raised a Methodist; I've spiraled or tap danced on or over that fine line or is a chasm between Christianity and paganism for years. Researching our family tree led me to whole branches of Quaker ancestors. Finding your blog helped me find the courage to explore both branches. Looking forward to your next installment.
1:25 PM

Here's an ironic coincidence for you.

Back in the mid-1990s, I learned from fellow Quakers in South Carolina of the work Jubilee Partners did with refugees. Because refugees are a particular concern for me, I sent them a check each year for several years.

Until the year that someone there returned the check, along with a letter asking why I always wrote "Blessèd Be" on the note line of the check.

I don't remember what I replied, except that I spoke of my own Christ-centered faith and explained the phrase as a universal blessing.

They responded that they could not accept money from someone who was not an "orthodox" Christian (in the sense they understood that).

As you say, "They were actively working to become the best, most righteous and loving people they could be...[but] they'd lost the ability to think critically about that process or about their religion."

That's why I appreciate so much your sharing the passage from Friends Freedom Church's Faith & Practice.

Peter Bishop said…
Michael,
That shocks even me. Even after my own crushing experience there, I'm really surprised by that level of exclusivity.

Jackie,
I'm glad we have helped. Cat and I have both worried at times that our very presence in the RSOF might shake some people's faith. It's good to hear that the opposite can also happen!

Steve,
Part two is almost in the can, and will be posted soon.
5:46 PM

Red in Tooth and Claw

By Cat C-B (and/or Peter B) October 13, 2009
When Nora, Peter's grandmother, lived with us , our household was the nucleus of an active local Pagan community. Over time, dementia eroded more and more of Nora's ability to retain anything she learned about in the present, so she wound up discovering again and again that she was living in a family of Pagans. Over and over, we would have made some reference to our Paganism, and Nora, having forgotten about it for the time being, would ask us to explain again what it was we believed. We would explain, yet again, about all of life being sacred to us, and nature being the source of our inspiration. Each time we did this, we would reach the point in our discussion where she would protest, quoting the line from Tennyson about " Nature, red in tooth and claw ." Nevertheless, we would insist that that was where we looked for the holy, and eventually, she would exclaim (just as she had the time before that): "Well, then, you're all heathens!" When we
30 comments
Read more